DaisyFresh has been commissioned by The Mercury Hibberdene Children’s Holiday Home to build a hydroponics produce-growing unit at minimal cost. The aim of the project is to reduce the costs of providing fresh fruit and veggies to the children who visit the home; at the same time, giving them a keen source of interest which may well assist their career choices later on. Read on to find out more about this hydroponics project…

DaisyFresh rises to the challenge

The Mercury Hibberdene Children’s Holiday Home is a seaside holiday home for underprivileged children on the KwaZulu-Natal South Coast which offers 1500 such children every year the opportunity to enjoy a beach holiday. The Home has a unique set of challenges, however – how to feed hundreds of children at a time a balanced, nutritious meal, whilst still keeping the menu interesting and costs down to a minimum. They approached DaisyFresh with the idea of growing their own produce in-house, and DaisyFresh has risen to the challenge! The main issues – Hibberdene’s hot and humid climate, particularly in the summer months, and the tight budget.

Hydroponics is often mistakenly regarded as an expensive way of growing produce, mostly due to preconceptions around the cost of building a hydroponic structure. The sort of hydroponics system constructed by many people is modelled on that designed for use in cold climates – a steel and plastic-covered construction – and the costs of building such a structure is influenced by today’s high price of steel and plastic. Such systems are not necessary in South Africa’s temperate climate, where there’s a greater need for cooling rather than heating (previously, we’ve discussed why housing plants in a plastic-covered tunnel is not a good idea in our country). The need for cooling is even more acute in the subtropical coastal areas of KwaZulu-Natal, where the Mercury Hibberdene Children’s Home is situated.
The temperature inside a plastic-covered tunnel without any form of assisted cooling in South Africa can rise as high as 55°C on a sunny day. Considering that any form of cooling merely drops the temperature back down to ambient levels is proof positive of the considerable waste of resources this fruitless exercise constitutes.

Why waste money on expensive steel and plastic, when gum poles combined with shade cloth make a very cost-effective and practical alternative? A simple gum poles and shade cloth structure has, in fact, been the proven method of choice of South African seedling growers and nurseries for decades. For the Home, DaisyFresh suggested a 240m² hydroponic greenhouse constructed from treated gum poles combined with a 60% shade cloth cover, together with weld mesh as a monkey deterrent. In addition to this low-tech, cost-effective solution, we orientated the greenhouse North-East to South West – this way, the prevailing South Westerly wind can blow right through the tunnel from end to end, and the sun rising in the east and setting in the west will ensure even growth of all the produce.

Growing veggies in a greenhouse

The last challenge – how to grow different types of vegetables in one greenhouse, bearing in mind that different veggies require different strengths of water-soluble nutrients.

The answer lies in utilising two different recirculating hydroponic systems in parallel with each other, and grouping the vegetables together into two groups, each having its own EC (electrical conductivity) level. Two nutrient tanks are used with two independent drainage systems. In addition, two parallel hydroponic growing systems are used – for example, peppers and cucumbers are grown in bags, beetroot, cabbages and egg plants in sand beds, and tomatoes in our Verti-Gro® system. Irrespective of the system used, the pH of the nutrient water is kept at a constant 5.5-6.0.

The cost of the entire system, complete with monkey-proof weldmesh, is half that of a conventional steel and plastic tunnel. Now, the Mercury Hibberdene Children’s Holiday home has the means, not only to save money, but to provide its happy visitors with fresh fruit and veg, year round. An added bonus – the endless source of interest it provides for the children, where they can be shown how to grow their own produce without soil!

For more details on this innovative approach to hydroponics contact DaisyFresh. 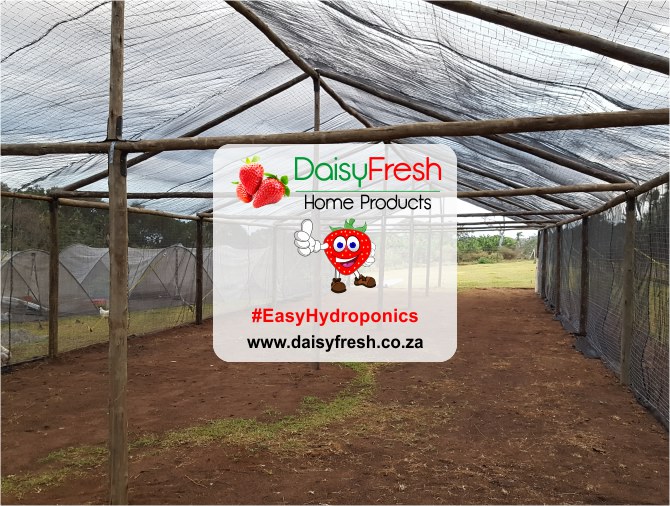