Skip to content
Home
/
Five Things to Know About Hydroponics

Hydro from the Greek meaning ‘water’ and ‘ponos’ from the Greek meaning ‘work’ gives us the meaning to work in water. Hydroponics is the growing of plants without soil. The plant nutrition, instead of being supplied by the soil is supplied by water soluble nutrients dissolved in the water. This gives this method of growing many advantages over growing in soil. The nutrients in soil are not evenly dispersed; very often they are lacking and need to be added; soil is a harbinger of insects, worms, larvae, and nematodes etc. all of which play havoc with the quality of the plant’s growth.  Very often the vitamins and minerals in a plant grown in hydroponics surpass that of the plant grown in soil because of the perfect nutrition it received during its life.

The pH of the nutrient water is a measure of the acidity or alkalinity of the solution. pH stands for pouvoir hidrogene and is French for the negative logarithm of the number of Hydrogen ions present in a liquid, solution or water. In hydroponics the pH of the nutrient solution is very important because different minerals are absorbed by the plant (or not) according to the varying pH levels. To ensure optimal absorption of nutrients the pH of the nutrient water must be kept at between 5.5 and 6.0.   pH is measured on a scale of between 0 and 14 with 7.0 being neutral so 5.5 – 6.0 is slightly acid. The pH of the solution can be corrected by adding acid (to bring it down) or an alkali such as Potassium Hydroxide (to raise it higher).

EC stands for Electrical Conductivity and is the method used to measure the concentration of minerals in a solution. It was first used by the German Scientist Werner Von Siemens so the unit of measurement has been named after him. It is milli Siemens per centimetre and is written mS/cm. Most seedlings are grown in a solution under 1.0 mS/cm whilst other plants can be grown at levels varying from 1.0 to 5.0 depending both on the plants and their stage of growth. 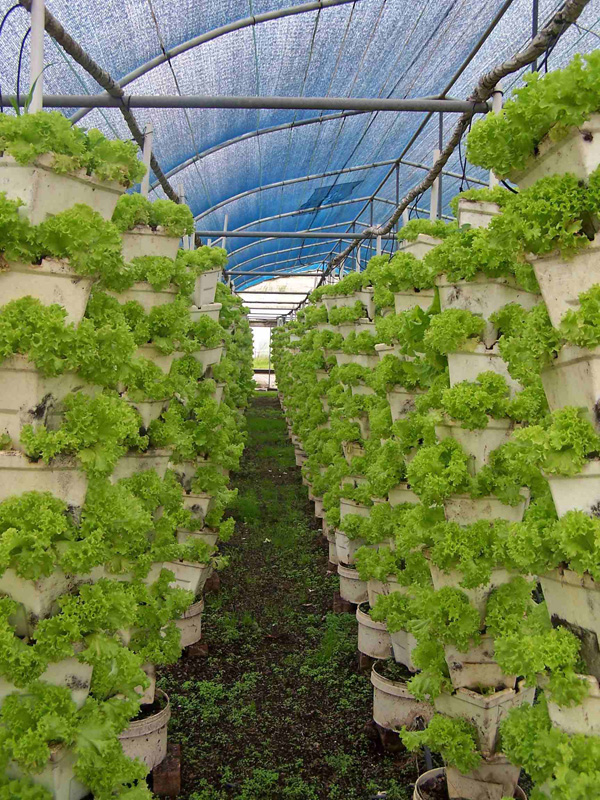 There are two methods of dealing the used nutrient water (leachate) in Hydroponics. In the first the leachate is allowed to drain out of the bag or container in which the plant is housed and run to waste over nearby soil grown crops or lawns and second is where the leachate is collected and pumped back to the header tank for re-use again. The second method saves on water and nutrients, both costly items nowadays. The returned leachate merely needs to be topped up with additional nutrients to bring it back up to the desired EC level.

It’s important to remember that the only difference between hydroponically grown produce and soil grown produce is the source of nutrition so pests and diseases can affect the hydroponic crop just as they do with crops grown in the soil.

However, having said that, hydroponic crops are often grown under some protection which does help to keep some of the pests out, and both pests and diseases seem to find it more difficult to infect healthy plants than sickly ones. Hydroponics’ optimal nutrition helps to ensure that plants are in tip top condition and not easy targets for pests and diseases.